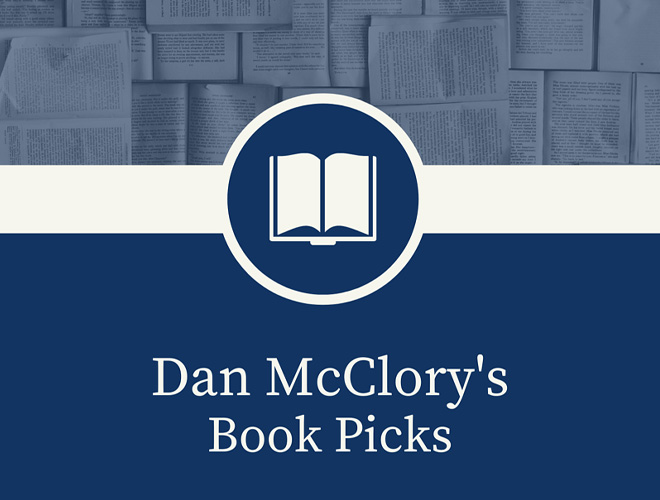 Posted at 07:45h in News by usatffadmin

While summer may be in full swing, and in fact moving dangerously close to Labor Day, many of us are spending more time at home in the “New Ab-Normal” of Covid-19. There is however, one activity that’s always great to do this time of year, Covid-19 or not – reading!

Below Boustead Securities, LLC (“Boustead”) Managing Director and Head of China & Equity Capital Markets, Dan McClory, shares his summer reading list filled with informative and inspiring books authored by established leaders who are his friends and fellow Directors on the USA Track & Field Foundation Board, sharing their business insights and life lessons.

1. Market Mover: Lessons From A Decade of Change at NASDAQ by Robert Greifeld

If you move in the world of finance, it goes without saying that Dan’s friend Bob Greifeld’s account of his 13-year tenure as CEO and chairman of NASDAQ is a must-read. Greifeld “details his transformation of Nasdaq from a fledgling U.S. equities market to a global financial technology company including seeing the company through one of the most mercurial economic periods in history: the Bernie Madoff mega-scandal; Facebook’s tumultuous and disastrous IPO; Hurricane Sandy’s disruption of the world’s financial hub; the implosion of America’s housing market and the global economic crash that followed. Each chapter focuses on a headline-making event and ends with a prescriptive takeaway to impart to his readers.” Greifeld is the Founding Chairman of the USA Track & Field Foundation Board of Directors, and under his leadership since 2006, the USATF Foundation has awarded $6.7 million to 406 elite athletes with a remarkable number of 1,015 grants.

2. To Be A Runner: How Racing Up Mountains, Running with the Bulls, Or Just Taking on a 5-K Makes You a Better Person and the World a Better Place by Martin Dugard

For all the runners out there, those looking to fall in love with running, or simply interested in an engrossing and adventurous read, you’ll find yourself absorbed in Martin Dugard’s fast-paced world.

“With an exuberant mix of passion, insight, instruction, and humor, bestselling author and lifelong runner Dugard takes a journey through the world of running to illustrate how the sport helps us fulfill that universal desire to be the best possible version of ourselves each and every time we lace up our shoes.

To Be a Runner represents a new way to write about running by bridging the chasm between the two categories of running books: how-to and personal narrative. Spinning colorful stories of his running and racing adventures on six continents, Dugard considers what it means to truly integrate running into one’s life. As entertaining as it is provocative, To Be a Runner is about far more than running: It is about life, and how we should live it.”

In addition to To Be a Runner, New York Times bestselling author Martin Dugard is the co-author of Killing Lincoln, Killing Kennedy, Killing Jesus, Killing Patton, Killing Reagan, and Killing the Rising Sun, written with noted television personality Bill O’Reilly. To date, there are more than twelve million copies of these books in print. Dugard leads the ODP for the USA Track & Field Foundation Board, where he focuses on growing youth distance running in America, and serves as track and cross country coach at Santa Margarita Catholic High School in Southern California.

As President of Media Sales for BET Networks, Carr has generated $8 billion in revenue over his 33-year career with the network. In Dirty Little Secrets, Carr shares many of the lessons he’s learned on how to excel both professionally and personally. “As you know, information has value, which is the reason many people are disinclined to share it…Dirty Little Secrets is my way of sharing one valuable lesson after another that can help you succeed.” He is one of the longest-serving Directors of the USA Track & Field Foundation. Carr was an outstanding 400-meter sprinter and he ran on the Chicago-area high school team that set the world indoor record for the mile relay. He competed as a scholarship track athlete at Drake University, which named him last month to its Board of Trustees. Carr founded the Louis Carr Internship Foundation in 2003 to improve diversity in corporate America through paid summer internships. Since its inception, his namesake Foundation has helped secure 179 internships for students of color, 55 of whom have garnered full-time employment opportunities in the communications industry.

4. Clearing Hurdles: The Quest to Be the World’s Greatest Athlete by Dan O’Brien

Dan O’Brien knows a thing or two about overcoming great obstacles. In this riveting memoir, O’Brien shares his challenging upbringing through to his record-breaking Olympic career as a decathlete. “Only one man, the Olympic Gold Medalist in the decathlon, is officially deemed the World’s Greatest Athlete.” O’Brien is the first decathlete in history to win three consecutive world championships, and win five national championships in total. At the 1996 Olympics in Atlanta, he became the oldest decathlete to ever win an Olympic gold medal. “Clearing Hurdles also offers a window into the world of the decathlon and an inside look at some of its most influential athletes. In addition to his extraordinary career, O’Brien offers an insiders view of some of the greatest Olympic decathletes — of Bill Toomey the intellectual artist, Milt Campbell the most inspirational, and Bruce Jenner as the man most driven.” In addition to his leadership position on the USA Track & Field Foundation Board of Directors, O’Brien is a TV personality and color commentator, motivational speaker, and coach.

5. Three Weeks with my Brother by Nicholas Sparks and Micah Sparks

A fitting read for the current times, this book is an excellent reminder about embracing uncertainty and appreciating the things that matter most in life.

“Against the backdrop of the wonders of the world and often overtaken by their feelings, daredevil Micah and the more serious, introspective Nicholas recalled their rambunctious childhood adventures and the tragedies that tested their faith. And in the process, they discovered startling truths about loss, love and hope. Narrated with irrepressible humor and rare candor, and including personal photographs, Three Weeks with my Brother reminds us to embrace life with all its uncertainties. . . and most of all, to cherish the joyful times, both small and momentous, and the wonderful people who make them possible.”

Nicholas serves on the USA Track & Field Foundation Board from his base in coastal North Carolina. A former full scholarship college athlete (he still holds a track and field record at his alma mater, the University of Notre Dame) he also spent four years coaching track and field athletes at his local public high school. In 2009, the team he coached at New Bern High School set a World Junior Indoor Record in the 4×400 meter relay, in New York. The record still stands.

Nicholas is one of the world’s most beloved storytellers. All of his books have been New York Times bestsellers, with over 105 million copies sold worldwide, in more than 50 languages, including over 75 million copies in the United States alone.

6. What It Takes: Lessons in the Pursuit of Excellence by Stephen A. Schwarzman, Chairman, CEO and Co-founder of Blackstone

Steve Schwarzman chronicles his journey from folding handkerchiefs in his father’s linen shop to building the leading global financial institution. Schwarzman shares significant milestones in his life to “show readers how to build, transform, and lead thriving organizations. Schwarzman’s story is an empowering, entertaining, and informative guide for anyone striving for greater personal impact. From dealmaking to investing, leadership to entrepreneurship, philanthropy to diplomacy, Schwarzman has lessons for how to think about ambition and scale, risk and opportunities, and how to achieve success through the relentless pursuit of excellence. Schwarzman not only offers readers a thoughtful reflection on all his own experiences, but in doing so provides a practical blueprint for success.” Schwarzman was a standout sprinter on his suburban Philadelphia high school track team and his philanthropic impact on the sport today through his innovative “Stephen A. Schwarzman Grants” to the USA Track & Field Foundation are without parallel worldwide. “As a former track & field athlete and an avid fan of the sport, I am proud to support our nation’s most promising athletes as they train and compete at the highest possible level,” said Schwarzman, who is Chairman, CEO and Co-Founder of Blackstone. “I look forward to watching these athletes reach new heights as they represent the United States at the Olympics and World Championships.”